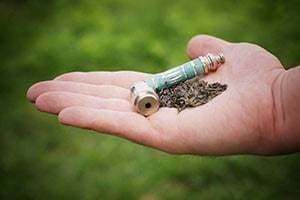 Definition of Marijuana in Virginia

Virginia Code §54.1-3401 defines marijuana as ""any part of a plant of the genus Cannabis whether growing or not, its seeds, or its resin; and every compound, manufacture, salt, derivative, mixture, or preparation of such plant, its seeds, its resin, or any extract containing one or more cannabinoids. Marijuana does not include the mature stalks of such plant, fiber produced from such stalk, or oil or cake made from the seeds of such plant, unless such stalks, fiber, oil, or cake is combined with other parts of plants of the genus Cannabis. Marijuana does not include (i) industrial hemp, as defined in § 3.2-4112, that is possessed by a person registered pursuant to subsection A of § 3.2-4115 or his agent, or (ii) a hemp product, as defined in § 3.2-4112, containing a tetrahydrocannabinol concentration of no greater than 0.3 percent that is derived from industrial hemp, as defined in § 3.2-4112, that is grown, dealt, or processed in compliance with state or federal law."

On July 1, 2020 the law related to simple possession of marijuana dramatically changed in Virginia. Before that date it was punishable by possible jail time, fines, and suspension of driver's license for six months.  It is now a non-criminal civil violation under Virginia Code §18.2-250.1 to possess up to one ounce of marijuana for personal use.  It is punishable by a civil fine of up to $25.  Jail time may not be imposed.

The offense is charged by the issuance of a Summons, and the person may not be arrested.  No court costs may be imposed for a violation of the law.  A violation of this law section may not be reported to the Central Criminal Records Exchange.  However, if you are convicted of this law while operating a commercial motor vehicle, it may be reported to the Division of Motor Vehicles and shall be included on the driving record.

Persons charged under this new law have the same rights to trial in the General District Courts as someone charged with a misdemeanor.  They also have the right to appeal the case to the Circuit Court if convicted. The state must prove the charge "beyond a reasonable doubt."  This is the same burden of proof as a regular criminal case. 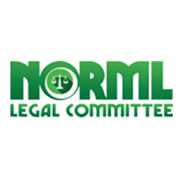 Persons charged with having up to an ounce of marijuana may still be charged with possession with intent to distribute marijuana under Virginia Code §18.2-248.1. However, it is much harder now for the state to prove intent to distribute under the new law. There is a "rebuttable presumption" that possession of up to one ounce is for personal use.    It is a Class One Misdemeanor punishable by up to 12 months in jail and/or a fine of up to $2,500.00.  The driver's license of the person may be suspended for six months if convicted.

Virginia Code §18.2-248.1 specifies that possession with intent to distribute more than one ounce to five pounds of marijuana is a Class Five Felony. The Code states the punishment for this level of offense as imprisonment for not less than one year nor more than 10 years, or in the discretion of the jury or the court trying the case without a jury, confinement in jail for not more than 12 months and a fine of not more than $2,500.00, either or both.

Virginia Code §18.2-248.1 further states that possession with intent to distribute more than five pounds of marijuana is a felony punishable by imprisonment of not less than five years.  The maximum prison sentence that may be imposed is thirty years.

Manufacturing Marijuana or Possession with Intent to Manufacture Marijuana is a felony punishable by five years to 30 years in prison, and a fine up to $10,000.00.  A defense of personal use exists for this particular section of the Code.

A third or subsequent conviction under Virginia Code §18.2-248.1 is punishable by a mandatory, minimum sentence of five years in prison or up to life in prison, and a fine up to $500,000.

All marijuana distribution convictions result in a loss of the person's driving privileges in Virginia for six months.

There is a defense of accomodation available to someone charged with felony distribution in Virginia.  The statute states that it is a Class 1 misdemeanor to provide the marijuana to another for no compensation.  There must be no intent to profit by the transaction.   This is applicable when the defendant did not receive any money or compensation for the exchange.  It is also required that the defendant did not intend to induce someone to use, become addicted, or dependent on the drug.  It is considered a Class 1 misdemeanor, punishable by up to twelve months in jail and/or a fine of up to $2,500.00.

There are many technical defenses to the charge of possession of marijuana and possession of marijuana with intent to distribute. Marijuana cases often involve complex search and seizure defenses that only a qualified and experienced attorney can present in court.  The laws and defenses are evolving in this state every year.  Attorney Yeargan has experience handling drug cases in both state and federal courts.