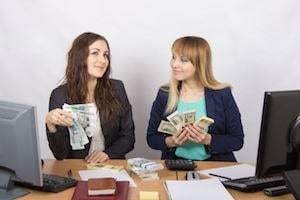 Elements of Embezzlement in Virginia

To be guilty of embezzlement in Virginia, the prosecution must prove the following under Virginia Code §18,2-111:

If any person wrongfully and fraudulently use, dispose of, conceal or embezzle any money, bill, note, check, order, draft, bond, receipt, bill of lading or any other personal property, tangible or intangible, which he shall have received for another or for his employer, principal or bailor, or by virtue of his office, trust, or employment, or which shall have been entrusted or delivered to him by another or by any court, corporation or company, he shall be guilty of embezzlement. Proof of embezzlement shall be sufficient to sustain the charge of larceny. Any person convicted hereunder shall be deemed guilty of larceny and may be indicted as for larceny and upon conviction shall be punished as provided in § 18.2-95 or § 18.2-96.

Since all elements of the crime must be proven beyond a reasonable doubt, one missing piece is sufficient for a finding of “not guilty”.

For example, if a person is proven to have wrongfully and fraudulently disposed of money belonging to another person (sufficient to establish the first two elements), but that property was not entrusted to him as described in the third element, he is not guilty of embezzlement.

If you've been charged with embezzlement, you don't have to try to sort out the complicated nuances of the crime on your own. An experienced Fairfax criminal defense lawyer can explain the elements of the crime to you in plain English, and will assess the facts in your case to determine your best defense.

Defenses to Embezzlement Charges in Virginia

One possible defense to embezzlement charges is that the defendant had a good faith belief that he had a genuine right to dispose of or otherwise use the property as he did.

Imagine that two hikers are driving across the country to hike the Appalachian Trail together when one takes ill and is required to fly home. He tells the second hiker “take my gear and supplies.” The second hiker does so. Along the journey, he encounters another hiker who is in need of equipment and sells him the sick hiker's tent, representing it as his own.

Does the second hiker have a defense to embezzlement charges?

The answer is, “that depends”.

But, what if the arrangement weren't so clear?

Maybe the hiker who went home meant only for the second hiker to transport his goods home, as described above. However, the hiker who continued on the journey genuinely misunderstood the sick hiker's intentions. He had a good faith belief that, since this was a once in a lifetime trip and the gear had been purchased specifically for the trip, the sick hiker had no further use for it and was giving it to him to use or dispose of as he pleased.

In this second scenario, the second hiker has a defense to embezzlement.

Another defense would be that the property was not in fact given or entrusted to the defendant in the manner described by the statute.

Imagine a variation on the scenario above in which two hikers have campsites set up near one another. They didn't know each other before arriving at the common campsite, but stay in the same location for two days, socializing and sharing meals. On the second afternoon, one hiker goes into the woods for a long walk, leaving his gear beside his tent. He assumes that because he and the other hiker have become friendly, his new acquaintance will watch his belongings. Instead, the remaining hiker packs up his gear, then removes the money and valuables from his neighbor's pack, pockets them, and continues on his way.

In this scenario, the hiker who took the property has a strong defense to embezzlement charges: though his neighbor may have felt that he was entrusting his property to the defendant, he had not clearly done so. (Of course, this would not protect the thieving hiker from other types of larceny charges.)

Get the Help You Need With Virginia Embezzlement Charges

If you're uncertain how the possible defenses to embezzlement charges might play out in your case, don't worry—you don't have to figure it out for yourself. Contact a Fairfax criminal defense lawyer to discuss your case and the defenses that may apply in your particular circumstances. Call or contact the Law Office of Wilfred W. Yeargan online today.